I have spent the last month attempting to keep all things “cancer” out of my mind. Apparently, that included posting to this blog, as I realize it has been over a month since I’ve updated everyone who follows me here. Cancer treatment is a long road and can consume all of one’s time, energy and thoughts. Clearly, it is a road worth taking, but like any long journey, sometimes it is necessary to step back and gain a different perspective before continuing. This month long break between chemo and radiation was just the respite I needed in order to rebuild the strength and determination I need to finish stomping cancer out of my life.

The last round of chemotherapy brought some challenges, but my focus in July was to push through and enjoy as many fun summer activities as possible before the start of radiation, which will impose some limitations on me.

I think I did fairly well during this break in treatment. My returning energy levels and diminishing side effects allowed me to take a couple of camping trips (one by motorcycle), I did some hiking, spent a week at the family lake house, attended state fair (I even went on a couple of rides), and hit some outdoor music festivals. Sadly, I was unable to participate in the Riverwest24 (a great neighborhood 24 hour bike race), but I was able to observe the event as a spectator, which gave me an opportunity to see friends and share the event with my kids. All of this was punctuated by weekly doctor appointments which served to remind me that I’m not over this yet. 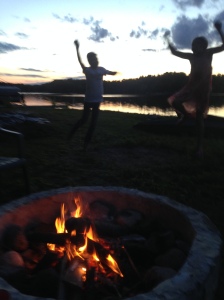 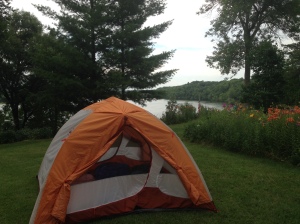 By the end of July, I had a final appointment with the medical oncologist, during which she told me that I was doing great and my blood work proved that I was ready to move on to radiation. She passed me on to the Radiation Oncologist, with whom I met on Friday, July 29th. He seemed confident that I would tolerate radiation without problems. He assured me that it would be a breeze compared to chemotherapy. I was told to expect fatigue, and localized damage and burning to the skin at the site of the radiation. I was also told to stay out of the sun and no swimming. This was, perhaps, the hardest pill to swallow, as August is my favorite month specifically because I love hot weather, the feel of the sun and swimming (things that are cruelly limited in Wisconsin). After the meeting with the doctor, I went in for radiation mapping. The mapping involves a CT scan, lots of measurements and small tattoos to mark the precise location where the radiation will be targeted. After this appointment, I was scheduled to start radiation on August 6th, which allowed me one more weekend to escape.

I took the opportunity to combine two of my favorite things for the first time. Motorcycling and camping. Both are also a huge passion of my boyfriend’s – so much so, that he has several books on the topic (traveling250.com for more). We had a campsite reserved north of WI Dells, but a last minute change allowed us to meet up with some of Andy’s friends, an Australian couple traveling the world by motorcycle. Their travels brought them to the EAA fly-in in Oshkosh, so we left Milwaukee a day early so we could join them. It was my first time to the fly-in. I was completely blown away by the magnitude of the event.

The ride took us through some significant storms and we arrived, late, to a soggy campground, where we had to set up the tent in the dark. It was worth it, as we got to share some wine and travel stories with some fascinating travelers well into the night. The following day, we walked all over the elaborate grounds of the EAA, attempting to squeeze way too much into too little time, as we wanted to leave early to beat the rain to our next campsite. We didn’t quite make it, and we arrived at Roche-a-Cri state park just as the hail hit. The ranger let us hang out in their shelter until we got a clearing in which to set up camp and cook dinner. The next two days were beautiful and we filled our time with hiking, relaxing and a couple of motorcycle meet ups with a group of friends, which took us through the dells, and a trip on the Merrimack ferry on the way home Sunday. 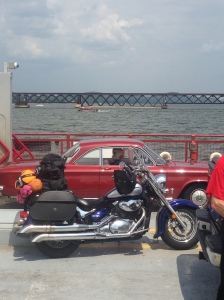 Back to my current reality after the camping trip, I went back to the hospital (Andy wouldn’t let me run away and extend our trip indefinitely…). Wednesday, August 6th would be my first day of radiation, which actually involves simulating the treatment with x-rays and further measurements and fine tuning to make sure everything is correct before administering the radiation. It was torture! Still not properly healed from rotator cuff surgery, I found it extremely difficult to lay still with my arms up over my head for such a long time. First, my arm went numb. Then it progressed to pain, then my arm started to shake from the pain, at which time I was reprimanded for moving and told that if I wasn’t completely still we would have to start from square one again. That was enough to make me push through, but I was nearly in tears by the end and not sure I would be able to hold this position 33 more times (yes, 5 days a week for 6 and a half weeks). They told me that the simulation would be the longest one and that subsequent sessions would not be that bad, so I went back again on Thursday to start radiation. Again, there was some fine tuning and double checking, and my arm went numb again, but did not have time to progress to pain by the time it was over. Friday was shorter yet, and my kids were with me, so they got a chance to see what I would be going through, which removed some of the mystery for them. They got to see the machine that gives their mom super-powers. And they got chocolate. What more could you want?